A Classic Game Continues to Inspire 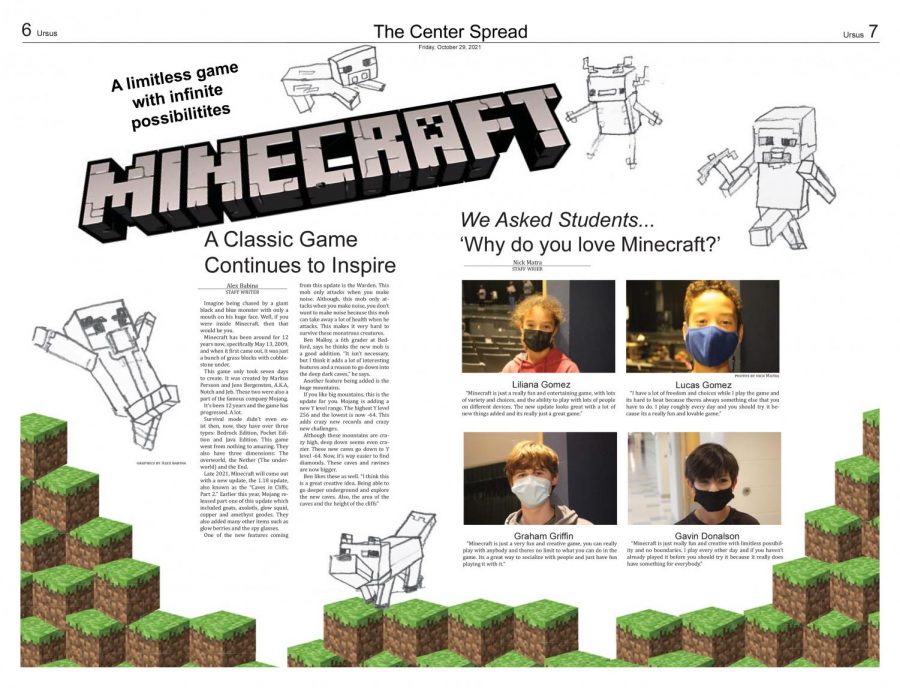 Imagine being chased by a giant black and blue monster with only a mouth on his huge face. Well, if you were inside Minecraft, then that would be you.

Minecraft has been around for 12 years now, specifically May 13, 2009, and when it first came out, it was just a bunch of grass blocks with cobblestone under.

This game only took seven days to create. It was created by Markus Persson and Jens Bergensten, A.K.A, Notch and Jeb. These two were also a part of the famous company Mojang.

It’s been 12 years and the game has progressed. A lot.

Survival mode didn’t even exist then, now, they have over three types: Bedrock Edition, Pocket Edition and Java Edition. This game went from nothing to amazing. They also have three dimensions: The overworld, the Nether (The underworld) and the End.
Late 2021, Minecraft will come out with a new update, the 1.18 update, also known as the “Caves in Cliffs, Part 2.” Earlier this year, Mojang released part one of this update which included goats, axolotls, glow squid, copper and amethyst geodes. They also added many other items such as glow berries and the spy glasses.

Ben Malloy, a 6th grader at Bedford, says he thinks the new mob is a good addition. “It isn’t necessary, but I think it adds a lot of interesting features and a reason to go down into the deep dark caves,” he says.
Another feature being added is the huge mountains.

If you like big mountains, this is the update for you. Mojang is adding a new Y level range. The highest Y level 256 and the lowest is now -64. This adds crazy new records and crazy new challenges.

Although these mountains are crazy high, deep down seems even crazier. These new caves go down to Y level -64. Now, it’s way easier to find diamonds. These caves and ravines are now bigger.

Ben likes these as well. “I think this is a great creative idea. Being able to go deeper underground and explore the new caves. Also, the area of the caves and the height of the cliffs”
‘Why do you love Minecraft?’