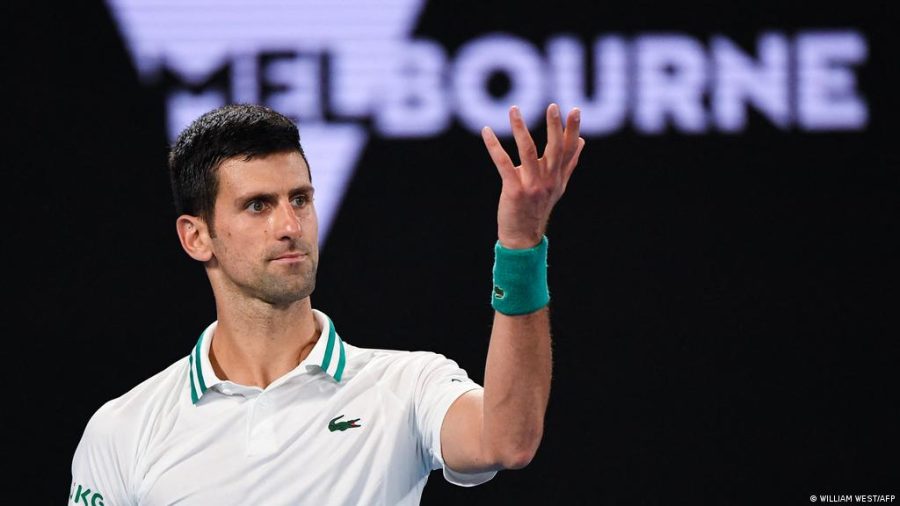 Novak Djokovic was unable to defend his title this year at the Australian Open.

COVID has been around for almost two years now, and it has not only changed all of our lives but the lives of some of our favorite sports players as well. While vaccines have helped lessen the effects of the illness and made life safer, vaccines have caused a lot of headaches for sports as they try and handle athletes and new rules. Sport associations started to make new rules and mandates for vaccinations.

Along with some of the new rules, famous sports players are skeptical about the vaccine. Novak Djokovic, a Serbian tennis professional and No. 1 ranked player in the world, was headed to Australia to play in the Australian Open but on Jan. 5 he was held back at immigration detention because Australia didn’t want a non-vaccinated player in the country.

When it went to the courts, Djokovic first won the trial because he claimed that he had COVID sometime last December. A few days later the immigration minister, Alex Hawke, revoked Djokovic’s visa which lead to Djokovic leaving Australia and not playing in the Australian Open for the next three years, unless he gets vaccinated.
How do the people feel about Djokovic not playing?

“I feel that this is a good decision, ‘’ said sixth-grader Oliver Nova from the green pod. “Nowadays with all these new variants and COVID spreading so fast the health of everyone is very important, and because Djokovic does not have the vaccine this is a very big health concern. I feel that he should not be able to participate in the Australian Open and not for three years.

Another athlete who caused drama is Kyrie Irving. On Oct. 12, 2021 Irving was not allowed to play in any NBA games nor be able to practice with his teammates until he is able to become double vaccinated. This is because they didn’t want other players getting sick .
The only games Kyrie Irving can play in are his away games.
How do the people feel about this?

”I think that Kyrie Irving is not getting vaccinated any time soon. When asked, he said that it is not about the money, it is about the love of basketball. I think that next year New York is going to drop the vaccination mandate and Kyrie will be able to play full time with the Nets,” said sixth grader Jaxson Lask from the purple pod.

Kyrie Irving is against the vaccine who says that ‘‘Nobody should be forced to do anything with their bodies. I am doing what’s best for me. I know the consequences here, and if it means that I’m judged and demonized for that, that’s just what it is,” Irving said.

Beyond the vaccine, Djokovic is a follower of alternative medicine. He went several times near the village of Visoko where there is a hill which is home to a pyramid. The highest in the world. Underground, energy tunnels that would allow the body’s cells to regenerate, said News in 24.

COVID has impacted sports in many ways with new rules being added into sports, tournaments being delayed or postponed. The 2020 Olympics in Tokyo was postponed to 2021. A common new rule in almost every indoor sports is a mask requirement. According to the NCAA, a person who has had a documented COVID-19 in the past 90 days is considered the equivalent of “fully vaccinated.” Making them allowed to play in any sports. A new rule in the NBA is that a positive COVID-19 test will not make you quarantined for 10 days but for six according to ESPN’s Adrian Wojnarowski.

At the end of every tennis match they shake hands but now with COVID going on, that doesn’t exist. The new rule is no physical contact with other players according to USTA.