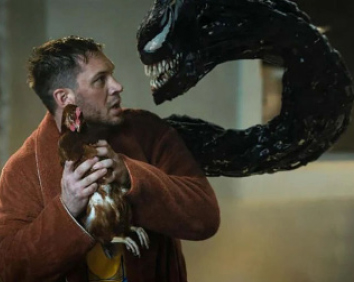 Eddie Brock holding chicken as venom comes out of his back.

With October upon us, the spooky season is just around the corner and that also means it is the time for scary movies.

In most cases, the shorter a movie is the more time it has had being tweaked to perfection. With the movie “Venom: Let There Be Carnage” this is the case.

We finally get to see Eddie Brock and his symbiote sidekick back on the big screen again. This movie is the sequel to the 2018 movie “Venom.” The first movie is about a hapless TV reporter named Eddie Brock who unwillingly gets bonded with the uncouth tentacled alien symbiote fans known today as Venom.

As we see Eddie and his alter ego back on the big screen, they face a newer and stronger villain then they ever have before. Carnage. Woody Harrelson’s Carnage is another amazing character to bring into the Marvel Cinematic Universe. And Carnage’s symbiote self wants vengeance against his “father,” Venom. Carnage has found himself a new host, the serial killer known as Cleatus Kasady with a previous connection to Brock. Kasady has his own symbiote but also a mad passion for

Naomie Harris’s character Frances Barrison or Shriek. Shriek is the madwoman wife of Kasady as she has the ability to manipulate sound.

With all credit due, “Venom 2” is able to manipulate the audience with all its twists and turns, most being cheerfully ridiculous. And though the movie might get a little bit slow at some times, it’s all worth it to see the amazing Venom versus Carnage fight scene, and the end credits.

This movie has some of the most funny, dramatic, and action packed moments that we’ve seen in any movie come out on the big screen this year. This movie has the ability to have tons of unsuspecting viewers walk into a movie theatre, and walk out ready to tweet or text their friends about what they just saw.
So that’s why you should swing over to your nearest theatre, grab some popcorn and go watch this movie!