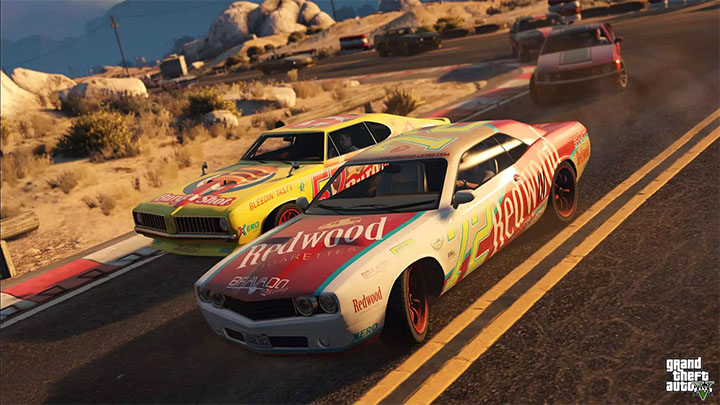 Racing, seen above, is a very big thing to do in the Grand Theft Auto Universe. People have made playable maps that have the weirdest features, whether it’s some of the biggest jumps ever seen, or magically turning cars into planes

There are a lot of video games in today’s world. A lot. Quite a large number of these include violence in some sense and may encourage violent behavior in real life. Among the most popular titles, “GTA V” is one of the most recognized. Notorious for being exceedingly violent and graphic, this game brings in players of all ages, all over the world.
But can it be too violent for young kids? We’re going to be covering that, while explaining exactly what the game is.

To start, let’s tell you what all the fuss is about. GTA V is an action-adventure game following the story of three criminals and the heists they’re trying to perform. It’s an open world-based game, meaning you can freely roam wherever you want in the map. With the help of some mods or modifications that you add, you can do just about anything. I mean anything. This is a possible source of the violence being found within the game, as players can add in whatever special weapons they want to. On top of that, they already have a massive array of weapons that come stock in the game.

“The Week,” says “Grand Theft Auto, one of the top-selling franchises ever, with 285 million games sold, is notorious for letting players ‘free roam’ around a city (based on Los Angeles) and kill random people.

The latest installment equips players with Beretta-like pistols, AK-47–like assault rifles, and an arsenal’s worth of other guns.”
From this small section, you can see just how “GTA V” might be affecting people in real life. With the ability to roam and kill whomever you want, you don’t know what that could translate to in real life.

However, “GTA V” is not the only game that can impact day to day life. A 2018 study found that “frequent players of graphically violent video games were less empathetic than infrequent players of graphically violent video games.” This includes “Call of Duty,? another shooter style game, this time based in a warfare scenario. This could very well be another source of real world violence. In fact, it already appears to be.

“The Week“ writes “In April, after a 19-year-old indicated on the message board 8chan that he was going to shoot up a synagogue in Poway, California, another 8chan user urged him to “get a high score” — as in, kill a record number of people. Many recent shooters have idolized Anders Breivik, the killer of 77 Norwegians in 2011, who said he “trained” by playing “Call of Duty: Modern Warfare 2.”

Both of these cases are indicating video games as references to shootings. The first, relating to the phrase “get a high score,” used in shooter games to talk about your highest kill count. The second, a person training for what they were going to do, by playing a video game. GTA V could very well be another “training” source for real life behavior.
We decided to ask some students at Bedford what they thought about violence in GTA V. According to Twain Domingue, a 7th grader in the red pod, “It’s a good game.” He also agreed that it was both violent and graphic, although he was ambivalent on if there was too much of this content. A minimum age requirement of 11 years old was his recommendation, despite the Entertainment Software Rating Board (ESRB) rating of seventeen and up.

Secondly, we interviewed Will Dransfield, another 7th grader in the purple pod. Will told us that he plays the game because “a lot of my friends play.” He’s had a lot of experience with the game and games like it, and agrees that it is violent. Still, Will said that he thought the violence would be okay for people that had played games with similar content or seen that kind of content. Will also rated the game for someone at least 11-12 years old, fairly similar to Twain’s recommendation.

It’s obvious to see that this game has brought in many players from middle school. With the existing knowledge that video games have had a role in real-life violence, can “GTA V” really be safe? Or, is it our fault for taking these games as serious as some of us have?