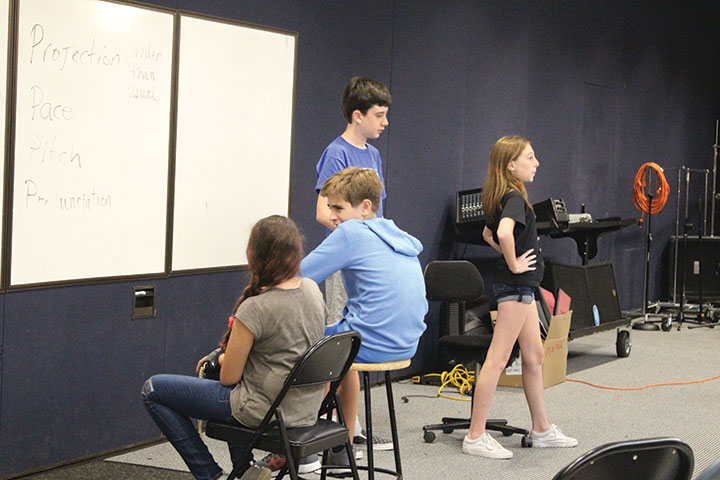 Cast members practicing one of the songs in a musical set in the rockin’ 50s.

The show must go on! Even with all of the chaos between Bedford and Coleytown, a play called “Bye Bye Birdie” will be performed on Nov. 22. “Bye Bye Birdie” is a play about love, bravery and music. This play is being performed by the marvelous 7th and 8th graders of the newly combined BMS. “One challenge we had was trying to make more parts for the larger group,” says Mrs. Karen McCormick, who is the director of the play.

Based on the hard work going on in rehearsals and backstage, this challenge is going to be turned into a great performance.

The combined team of directors Ryan Smith and Mrs. Karen McCormick have gone as far as to add an entire song.
The costumes can’t be matched. From great shades of red to leopard print, all of the costumes are better than ever.
“My favorite part of this production is watching the set come together,” said Josy Pitaro, an 8th grader, who plays Kim McAfee.

“Bye Bye Birdie” is set in 1950s America, and all of the teenagers are obsessed with Conrad Birdie, the hottest singer on the charts, a singer based off of Elvis Presley. When Birdie gets drafted by the army, all of his fans are filled with despair as he announces the news.

Albert Peterson, Birdie’s manager and songwriter, creates a final song called “One Last Kiss,” and comes up with the idea to nationally raffle off a final kiss from Birdie to one girl. Somehow, Kim McAfee, a resident of Sweet Apple, Ohio, is chosen. Coincidentally, the entire town goes crazier than usual for Birdie. Although, the good news doesn’t sit as well with Kim’s boyfriend, Hugo.

This is all very amazing, so just “Put on a Happy Face” and don’t miss this stellar production.